“Urgent action is needed to boost working class participation in public life, including the expansion of a scheme which saw bus drivers working as magistrates.”

So says a report by a thinking tank – the Policy Exchange Unit.

Thank the Lord that a load of middle classed Tarquins are watching over us.

But this does explain something to me.

It explains why me old Dad, Tex, has been dressing a bit strange. Black gown, wig, hammer. Thought he was goin’ to some S&M party.

And they hit the jackpot with Tex.

Case One – stealing a sandwich. Ham and pickle. Tex’s favourite. Off with his fingers.

Case Two – a bit of wandering hand in the work place. Not guilty!! You oughta have seen wot she was wearin’. Stone the strumpet instead.

Case Three – some argie bargie outside the Emirates Stadium. Slam ‘em all in the public stocks for a month.

Case Four – caught with a small amount of personal product. Red hot poker up the arse. And, boy, that hurt.

Tex quickly became the toast of the Walthamstow ‘short sharp shock’ brigade. The moral backbone of our society. All goody good. Until some smart Alec points out that Tex is, in fact, introducing his own version of Sharia law to the streets of North London.

So they, with regret, had to move him on. Bad publicity.

But I hears that the fine group of Tarquins on the Policy Exchange Unit are now looking for more working classed School Governors.

Bring back some 1950s style discipline is wot I’m hearing. Send for Tex. 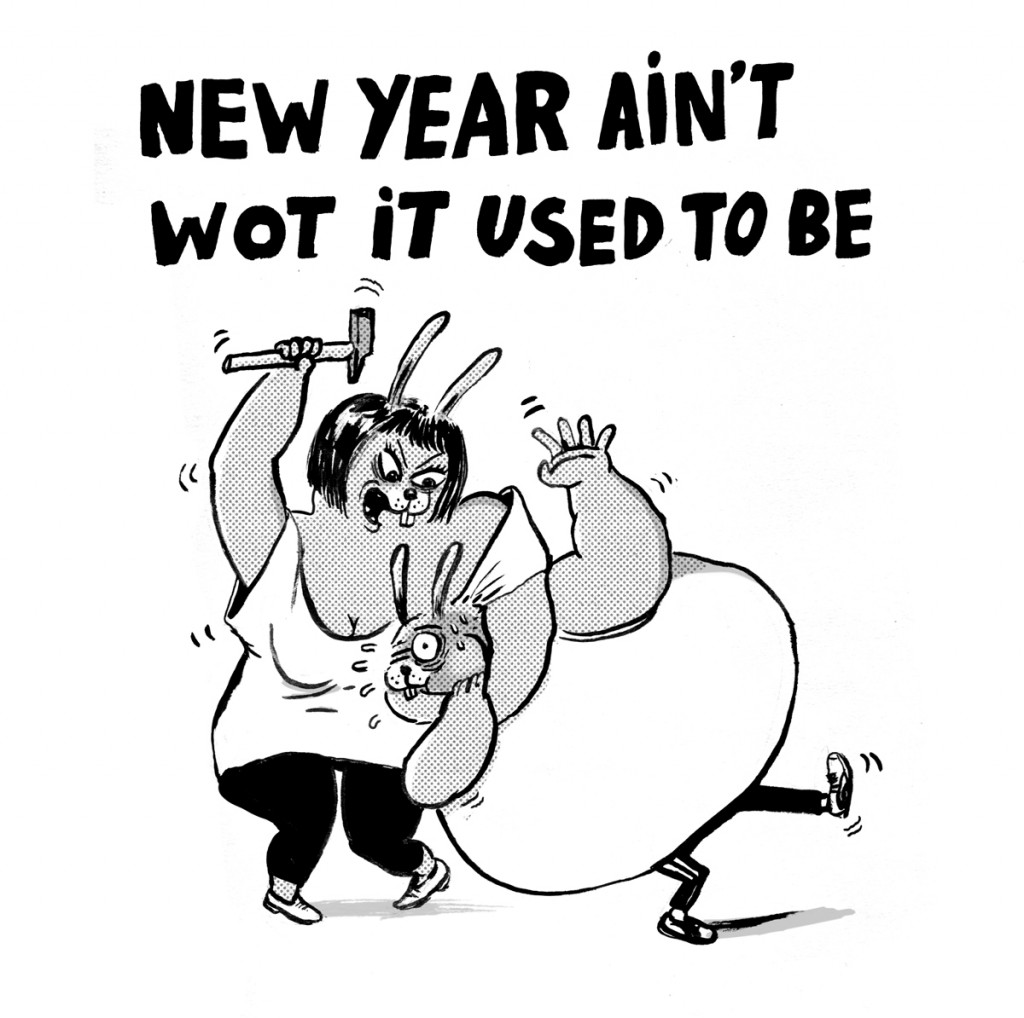 Haven’t been around for a bit. Let me tell you why.

Christmas and New Year is the most dangerous times for relationships. Too much together time, too much booze, too much shit TV.

Now my relationship with the Selina is volatile at the best of times. Add Sherry and Sherlock and 10 whole days together, the chances are it’s going to go to shit.

Night before New Years Eve we was watching the box early doors and a trailer comes on for Weight of the Nation – some Sky TV show about fatties in the USA. And there’s this bird talking on it who looks the dead spit of one of Selina’s many sisters – Shirley.

“Jesus that bird’s fat.” I says. “And she’s the dead spit of your sister Shirley.”

This wasn’t hard to do as Shirley was, in fact, sitting on the sofa right next to her. Taking up almost all of it. Eating a Big Mac and Fries. So there was no denying the similarity.

Of course it all kicks off from there. Despite her weight Shirley is pretty handy in an enclosed space and gets me in a headlock. Selina has her curling tongs out and does some damage to me tail area. I bounce them both off a couple of walls then Shirley comes right back at me with the claw hammer she always keeps about her person. Terrifying.

To cut a lot story short, I ended up locking myself in the spare room for me own protection. With Shirley camping out on the sofa outside like an invading Mongul army. Hammered up, waiting for me to try some rear guard action.

Well I was never gonna risk some rear guard action with her around, so in the spare room I stays most of New Years Eve. Until about tea time I hears some banging outside. I guesses its me Polska boys (who I’d texted earlier) come to rescue me. Time to unlock the door.

But no can do! The girls have padlocked me in.

“Happy New Year, you fat bastard.” Shouts Shirley from the other side of the door. “Here’s a new years resolution for yer. Why don’t YOU lose some weight. And you can stay put here till you have. Sucker!!!!

“And we’re off to the New Year 70s night in the Solidarity Social Club downstairs.” Selina chimes in.  “Have fun now.”

And off they went. Leaving me 12 storeys up and locked in.

Now you’re all probably thinking I’ve lost me mojo. How can a big fuck off rabbit like meself get done over by a couple of birds and spend New Year’s Eve on his todd, locked in his own spare room, without as much as half a lager for company?

Well you’d be wrong. What you, and they, hadn’t factored in was who I am and what I do. Because yours truly was, of course, the officially approved New Year’s supplier of all disco delights to said 70s Night in the Solidarity Social Club downstairs in the tower block. And where were those disco delights hidden? Yup. In me spare room. Hidden under the floorboards. With me collection of vintage Play Buns. Oh yus!!!

So I hunkered down and had meself the best New Years Eve ever!!!! Ignored all the whining and pleading that came later from the other side of the door to release the stash. Too late, suckers.

Boy I had a blast. Literally. Caught up with loads of old glossy furry friends and did enough Class A’s to launch a spaceship!

Only came back to earth this weekend. Bloody marvelous. And you know the best part? I lost a load of weight. My New Year resolution?

Put it all back on. 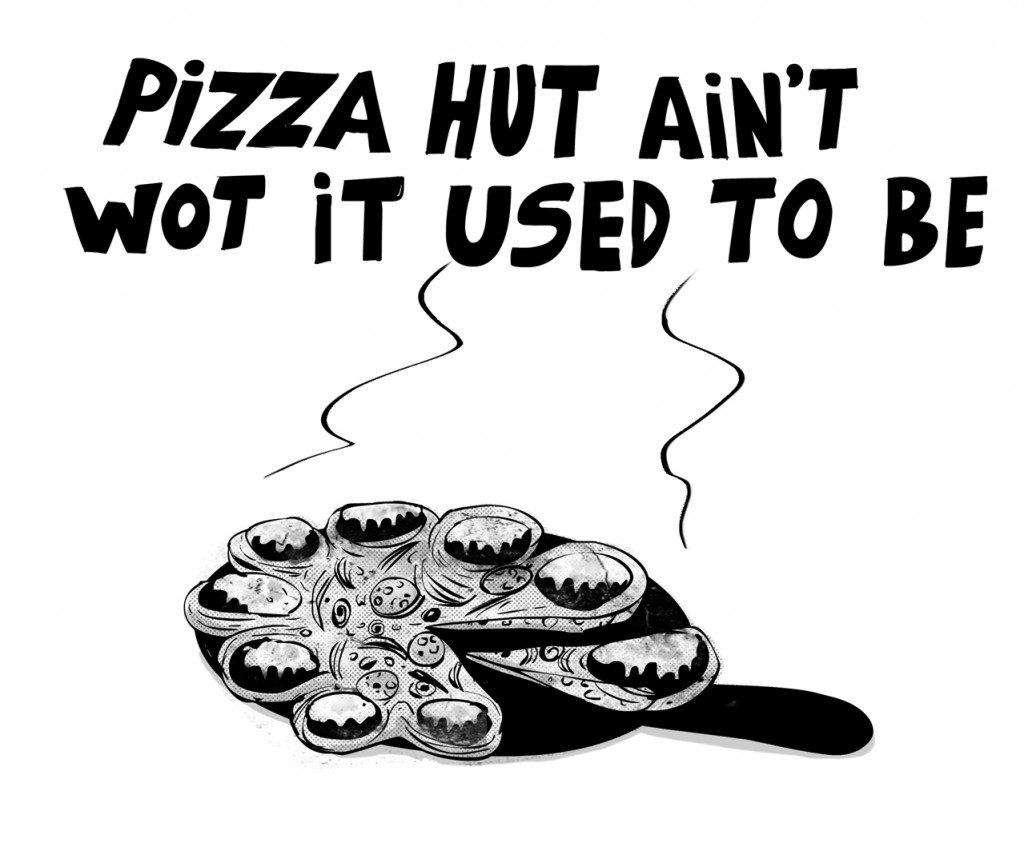 I is all of a quiver. All me dreams have come true. Pizza Hut have introduced a new pizza.

And it just gets better. There’s ten (yes, ten!!!) 100% British Beef Burgers on this motherfucker. And you can have any large pizza topping on it.

So how’s about a Pepperoni Feast Cheeseburger Pizza? That’s double pepperoni and extra mozzarella AND ten burgers, my friends.

But now I is worried. Fast Gerald has pulled out his smartass phone and showed me their promotional guff.  The headline reads……

“All the fun without the bun!”

Don’t like that headline. And, even worse, the pizza is only on offer for a limited period of time.  Cripes!!!

So this bun is getting himself down the Ferry Island Retail Park Pizza Hut in Tottenham Hale pronto. And he is going have himself a lot of ‘no bun’ fun.

Gonna stay there 24/7. While stocks last.