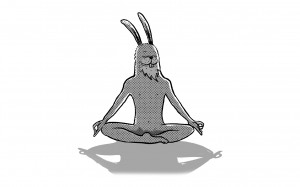 Where have I been the last couple of years, you ask. In chokey? Predictable theory. But you might just be wrong there. Because truth be told, I have, in fact, been having a mid life crisis.

I was watching a documentary ‘bout one of me heroes – Georgie Best. And seeing his fall from grace, I came to the conclusion that a life full of birds, booze and associated paraphernalia ain’t worth the credit card it’s stacked on. Just ask Ollie Reed. Oh you can’t. He’s dead. Holding that very same credit card.

So I decided to re-evaluate myself. Cut the crap and find the inner rabbit within.

I started off looking East. Good enough for the Beatles back in the day. I went down the Taj Mahal in Woolwich. Got some advice about clean living off Big Daddy Dosa Bunny. A legend down there. Ex boxer. The King of the Curry Ring. Guru. His advice. Work out every day, stick to madras and knock it on the head after 4 pints of Cobra and a free brandy.

Wise words. And I gave it shot. Several shots as it turned out. Culminating with a Jager bomb or three. And as one bomb led to another there was a bit of a rumpus. Poppadoms at dawn really. But the rozzers were called and me and Dosa spent a night in the cells.

Against all odds this is where me journey proper began. The rozzers was trying out a new scheme. Instead of a duty brief, they had a duty shrink. And he decided he was going to get to the bottom of me anger issues. ‘How long you got?’ I said. “All night if necessary” he replied. Which is how long it took.

And who’d have guessed it. I have what those in the shrinking business politely call ‘Puer Aeturnus’ syndrome. I am a rabbit who refuses to grow up. In me forties but won’t let go of me youth. Not uncommon when you’ve got a crap dad like Tex who left us baby bunnies to be brought up by our Ma. Makes it hard for me to form proper relationships apparently. This frustrates me and that’s why I throw me toys out the pram. At the drop of a hat. Again and again.

The shrink told me about my inner rabbit. He says my inner rabbit is a really quiet, beautiful and vulnerable soul. He said if I try really really hard I can find him. Wouldn’t be easy and would take some time but if I put in the effort I could definitely find him.

So that’s where I’ve been.

I tried all the next day to find to find this bloody inner rabbit. Looked everywhere. Eventually found meself in the local student union and, you know what, there he was. He was a thin chap with a beard playing pool. Looked like Jesus. Wearing hush puppies and smoking a vape. Talking in an accent somewhere between Kingston Surrey and Kingston Jamaica. I knew immediately that this boy was a really quiet, beautiful and vulnerable soul. And definitely my inner rabbit.

So I goes up and embraces him. And I carries on embracing him really really hard. “What you doing, blood?’ He gasps. “I’m embracing you.” I replies. And I embraces him even harder.

And you know what? There ended the quest for my inner rabbit. And you was right in the first place. I got 2 years in chokey.